We open our 2012-13 season with an afternoon concert honouring the sacrifice of lives during war. Remembrance will feature readings and music for Remembrance Day, including Pie Jesu by Ottawa composer James Wright and For the Fallen by Eleanor Daley, with trumpeter Chris Lane. As part of its outreach program, the choir will be joined by the Ottawa Regional Youth Choir. The concert will pay tribute to those who fought for our freedom, promoted peace in conflict zones around the world, and continue to combat terrorism in Afghanistan. In words and song, we will remember them.

Christmas Around the World

The Canadian Centennial Choir's Christmas concert will feature carols and songs from around the world. Accompanied by guest instrumentalists, the choir will perform new compositions and traditional favourites in an eclectic variety of musical flavours, from spirituals to salsa.

Duruflé Requiem and Other Sacred Music 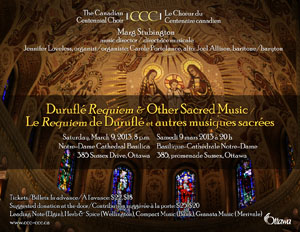 Written in 1947 in memory of the composer's father, Maurice Duruflé's Requiem is one of the most beautiful works in the choral repertoire. The choir and its artistic director are really looking forward to presenting this remarkable and inspiring work together with additional selections of sacred music. This challenging concert program, featuring organist Jennifer Loveless, promises to be extremely rewarding, both for those participating in the concert and for our listening audience. 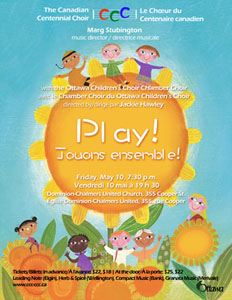 Let your hair down at our final concert of the season, a joint performance with the Ottawa Children's Choir Chamber Choir directed by Jackie Hawley! The program will include the Nursery Rhyme Cantata by Nick Page, the humorous Figures de danse by Lionel Daunais, Insalata Italiana by Richard Genée, Paul Drayton's clever Masterpiece set (made famous by the King's Singers), and other playful works. Each choir will perform individually, then we will join together for a celebration in song.